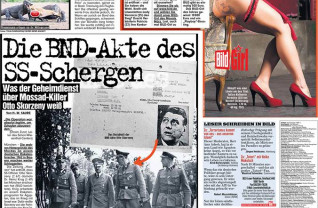 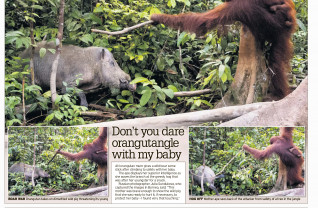 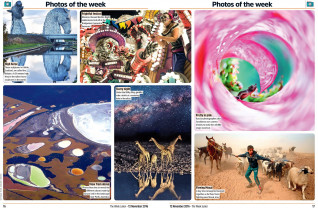 Lightning Bolt Misses Giraffe
Meteorologist Ari Sarsalari explains how a lucky photographer gets shot that looks like a lightning bolt has hit a giraffe (which it did not) at Etosha National Park in Namibia.

Russian photographer Julia Sundukova thought she captured the shot of a lifetime when she took what appeared to be an image of a giraffe being struck by lightning.

 
But the giraffe is perfectly fine; if you look closer, you'll notice that the lightning bolt was nowhere near the animals. The giraffes at Namibia's Etosha Park were in a field facing away from the storm and did not see the lightning bolt as it was produced, according to the Daily Mail.

These perfectly-timed images make a gentle giant giraffe look like a carnivorous predator as he chomps down on an unsuspecting oxpecker.

IN a battle of claws and strength, two male Komodo dragons fight for dominance

This is the remarkable moment a pair of Komodo dragons tore a goat to pieces after hunting the animal in a pack on the remote Indonesian island they call home.

Incredible pictures show lemurs bungee jumping down from branches to inspect a camera.

This hungry chameleon can’t help but smile after devouring his dinner.

Stunning photographs demonstrate the bizarre relationship between the animal kingdom's tallest mammal the giraffe and the tiny red-billed oxpeckers in east Africa.

These Lions have the right idea! What better way to spend the day than li-on around!

Nothing beats a good lazy nap during a summer day — even if it's on a tree covered in spikes.

"The lioness with the collar was the mother of the cub she played with," Sundukova said. "There were no males around, so it was interesting to observe how the cubs play and interact with the female."

Russian wildlife photographer Julia Sundukova, 41, captured the extraordinary moment while travelling through rural Uganda. The euphorbia tree is native to southern Africa and its milky latex is highly poisonous, causing blindness and severe skin irritation. But these fearless felines sprawled on the branches of the euphorbia, also known as the ‘candelabra tree’, to catch up on sleep. These brave lions weren’t at all put off by their choice of napping location – the spiky embrace of the cactus-like euphorbia tree.

The photo was taken by photographer Julia Sundukova while at Hwange Park in Zimbabwe, British news agency SWNS reports. Sundukova, 41, said the heartwarming moment became all the more special because of how intimate the young cub and its mother appeared to be.

The hilariously timed photo shows a hippo looking like its smoking a "cigar." The hippo was photographed by 32-year-old Russian photographer Julia Sundukova at the Nile River close to Murchison Falls in northern Uganda. Julia said: "the hippo was totally savoring the moment – sunbathing in last for the day sun rays, been massaged by blue Nile's water, chewing a wood stick."

A photographer has snapped a remarkable image of a young lion cub appearing to give a kiss on its mother's nose. The photo was taken by photographer Julia Sundukova while at Hwange Park in Zimbabwe, British news agency SWNS reports. Sundukova, 41, said the heartwarming moment became all the more special because of how intimate the young cub and its mother appeared to be.